Главная / antique / A Valentine from Harlequin: Six Degrees of Romance 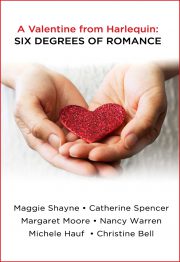 One opening paragraph, six unique stories…
What if you gave six authors the same opening paragraph and let their imagination fly? That’s what we’ve done in A Valentine from Harlequin: Six Degrees of Romance!
Experience the variety Harlequin romance has to offer with this collection of novellas from six Harlequin series, including the passionate drama of Harlequin Presents, steamy encounters of Harlequin Blaze, spooky and sensual tales of Harlequin Nocturne, and more.
Collection includes novellas by Nancy Warren, Catherine Spencer, Margaret Moore, Maggie Shayne, Michele Hauf and Christine Bell.

A Valentine from Harlequin: Six Degrees of Romance

What if you gave six authors the same opening paragraph and let their imagination fly? That’s what we’ve done in A Valentine from Harlequin: Six Degrees of Romance!

Experience the variety Harlequin romance has to offer with this collection of novellas from six Harlequin series, including the passionate drama of Harlequin Presents, steamy encounters of Harlequin Blaze, spooky and sensual tales of Harlequin Nocturne, and more.

I love romance novels. I adore modern-day quests or intrigue in ancient Rome; adventures in space (Star Trek always needed a little more romance); and being swept off my feet by a dashing knight or daring pirate. Whether I am looking for drama, passion, suspense or comedy, I can find it all in a romance. And a romance always delivers on its quintessential promise: no matter what agonies and challenges the hero and heroine must overcome, at the end there will be a happy ending!

I believe the optimistic, forward-looking, family-building nature of romance also explains why it is the best-selling genre of fiction. At the same time, some people question how different romance novels can be if they all have a happy ending. (If you are one of those people, please read my opening paragraph again. We have variety. Lots of it.) Because we receive this inquiry too often, especially when it comes to Harlequin’s series romance novels, we decided to take on this challenge directly and highlight how different our books can be—even if they all start with the same opening.

That’s right. Harlequin staff wrote the opening paragraph of a story and then asked six fantastic, challenge-loving romance writers to take it from there. And they did! We have a sexy Blaze, a passionate Presents, a thrilling romantic suspense, and more. We also included a steampunk story, which may be a subgenre that is new to many of you, but I hope you will enjoy Christine Bell’s tale as much as I do. (For those of you who are wondering what steampunk is, it’s a subgenre set in Victorian-era Britain where steam powers technological innovation. Think films like Sherlock Holmes with Robert Downey Jr.) I think after reading them all you’ll agree that like snowflakes, no two romances are ever the same.

Night of the Living Wed

Charlotte winced as an inebriated party-goer stepped on her foot, but she kept moving determinedly toward the doors that led to the balcony. The Duncans would be delighted with their party; it was clearly the event of the season, and their daughter had been successfully launched into society.

Unfortunately, the noise, the heat, and the crowd combined with Charlotte’s pounding headache to make her want to escape for a breath of fresh air. Reaching the balcony doors, she opened them to find two people engaged in a passionate kiss.

“I’m sorry.” The words escaped her mouth before she realized it would have been better to make an exit without being noticed. The couple jumped apart.

Charlotte felt the blood drain from her face as she stared at her fiancé. “John! I thought you were dead!”

John’s eyes narrowed as he peered at her through the gloom. He took a step away from the woman he’d been necking, a step closer to her. “Wishful thinking, Charlotte.”

She crossed her arms over her red Valentino sheath, trying to cover the tell-tale pounding of her heart. “I remember you saying something about us breaking up over your dead body,” she reminded him acidly. “Since we’re broken up, I assumed you must be dead.”

John moved away from the woman and stepped closer, looking more gorgeous than such a lowlife should be allowed to look. “If I’d given you a set of knives for an engagement present instead of a ring, I would be dead.”

As he spoke, she relived with devastating clarity the moment she’d thrown her exquisitely cut engagement ring at him—giving him a rather exquisite cut of his own just above his left eyebrow. Anger had given her superhuman strength—and an aim she certainly hadn’t shown in high school athletics.

The last time she’d seen John he’d chased her all the way down his hallway, blood seeping into his eye.

Residual anger glittered in his eyes. It ignited something inside her.

Of course, something usually ignited when they were close. Usually the bedsheets. Just the thought of the pair of them between luxurious cotton sheets had her poor overworked heart knocking itself out again as her libido spiked.

The truth sucked. She missed him.

He’d been unfaithful. He was a louse. He didn’t deserve her. It was over.

But still, she missed him. Their engagement had been an unmitigated disaster—well, apart from burning up the sheets, but that wasn’t enough to build a marriage on. There had to be trust. And faithfulness.

“Why are you here?” he asked her. The breeze blowing off Vancouver’s English Bay was cool and soft with a hint of ocean; the stone balcony was warmed by a gas heater. She shivered, but not from cold. What was she doing here? She might have guessed he’d be at the Duncan girl’s party—if only to flaunt his date under her nose. Sleazy two-timer.

“So was I,” he replied, his eyes crinkling in that sexy way she loved. “Perhaps the Duncans were trying their hand at matchmaking.”

“They probably got you mixed up with someone else.”

“I think I’ll go inside and…um…powder my nose,” said the date they’d both forgotten about.

She interrupted him with a gesture. “I’ll be right back.”

John’s recent kissee nodded to Charlotte. Charlotte nodded back, feeling like a marionette placed on the wrong stage. The woman’s voice was oddly familiar and yet she was certain they’d never met.

The woman—Sonya, he’d called her—disappeared through the French doors and they were alone.

She took a step back.

Why, oh why, did he have to be wearing a tuxedo when she saw him again? The crisp, dark lines, starched white linen shirt, and all those studs. Her eyes drifted closed for a moment as she heard the echo of studs popping and dancing across the polished wood of her living room floor one night—one of the many nights—when they’d been crazy for each other.

He reached out a hand to touch her shoulder, but she jumped out of his reach, knowing the power of his touch to fire her blood. “Don’t touch me.”

His eyes smiled into hers. Gray flecked with gold. She used to tell him they looked like granite with a vein of pure gold running through. She’d thought it an apt metaphor for all of him. He could be hard, impassive, even cold when required, but deep inside was a streak that was 24-carat pure and more precious than any metal. That was the part she’d loved.

Now she knew it was only pyrite: fool’s gold.

Her eyes widened as she experienced his traitorous nature yet again. “How can you say that when you were just kissing another woman?”

“That woman is a very nice lady who keeps me company when I need a date. But she’s not you.”

Suddenly she remembered where she’d heard the woman’s voice. “She kept you company in Atlanta, too. That’s why you didn’t introduce us. You didn’t want me to hear her voice. She’s the one who picked up the phone in your hotel room at two in the morning.”

“That’s right.” He said it so calmly, she wished they were still engaged just so she could hurl his filthy diamond at him again. “I always wondered why you called me so late that night.”

She let her eyebrows rise just a fraction, forcing cold amusement into her eyes, while deep down she was dying to know what else he’d wondered. Had he thought about her over the months since she’d dumped him? Wished he’d done things differently? Wished he’d remained faithful? At least until the damn wedding?

The sass went out of her as she thought of everything he’d thrown away. Maybe she’d never see him again, and suddenly, she had to know. “How could you do it?”

The anger that flashed in his eyes startled her. “Do what?”

“You weren’t playing canasta in your hotel room at two in the morning.”

“So quick to judge.” He moved so fast she didn’t have a chance to avoid him this time. His hand swooped, catching her arm, and where his fingers contacted her flesh she felt a sizzle all the way to her toes. No one had ever affected her like this. Not before and not since.

“So quick to betray,” she countered, hating the quiver in her voice even as she heard it tremble in the mist-soaked air.

“Do you really think so little of me? Of yourself? You think I’d cheat on you only a few weeks away from our wedding?”

Her chin went up at that. “I was home making out the invitation list for our wedding!”

“Ah,” he said, and the anger dulled, edged with humor now. “I always wondered what frightened you that night.”

“I was not frightened.” Charlotte pulled herself erect, stretching out every one of her five feet and eight inches. She looked tall, svelte, and madder than hell.

Scared, too. John saw it in her eyes, in the tensed shoulders exposed by her dress.

In the two months since she’d tossed his ring back in his face, he’d plotted revenge, tried to forget her, to move on as all his well-wishers urged, but it was hopeless. He’d suspected as much before. Now that she was standing in front of him, every delectable inch of her quivering with disdain, her scent reaching him, her skin begging to be touched, he knew he had to get her back.

He leaned a hip against the rail considering just how he was going to go about convincing the most stubborn woman he’d ever known that she’d been wrong. And that she wanted him back as much as he wanted her.

No, want didn’t begin to cover the feelings that swelled within him just being close to her again. Need was a closer fit. He needed her like he needed food, water, and shelter. It was that basic.

Of course, admitting she was wrong was not something Charlotte did gracefully, or well. Still, his life was on the line here. Both of their lives. And he had a small advantage in knowing his way past her defenses.

If straight talk wouldn’t convince her she’d been a fool to throw their happiness away, he could ambush her in the most underhanded way possible. He’d use his knowledge of her body against her. He could whisper in her ear and know her toes were curling without so much as peeking beneath her hem. A soft kiss on her nape would raise goose bumps down her spine, cause her to sigh and her nostrils to dilate.